How to Repair and Restore Broken Ceramic Objects

Ron's family's favorite cookie jar, a personalized New York taxi, was accidentally dropped, leaving a pretty big hunk missing. They were able to salvage some of the parts but not all of them, so this project required more than simply gluing together the pieces.

One of the biggest challenges in repairing an odd shape object like this is keeping it in the right position while working on it. Ron's solution was to use a bucket of sand to embed the ceramic piece so that it stuck up in just the position he wanted allowing him to have both hands free to work.

Ron used a dual syringe for dispensing equal parts of epoxy and hardener. Thorough mixing is important but so is time. You only have about three to four minutes to work with this adhesive.

A pair of self-gripping tweezers works better than fingers for very small pieces.After gluing back all the pieces there was still quite a bit of material missing, and Ron's challenge was to replace it. Ron's solution was an all purpose polyester resin filler that was quick setting, easy to shape and would stick to just about anything.  Each can comes with a tube of hardener and all you have to do is mix the two together. The more hardener you put in the resin, the faster it sets up.

Ron mixed in quite a bit so he only had about two minutes to work with the material. Ron over filled the cavity and then waited for the resin mixture to harden. When the material reached a rubbery state, Ron started shaping it. He removed some of the excess by first paring it away with a sharp knife. Then he began shaping the contours using a rasp.

Ron wrapped sandpaper around a dowel and removed the tool marks and blended the filler with the ceramic edges.  He switched to a very fine paper for the final smoothing.

Ron used artist's acrylic colors, beginning with white. He thinned the paint with water to make the paint brush on more smoothly. Acrylics can be intermixed with each other to create precisely the right color for a near perfect match.  In this case, a little white and red provided just the pink that Ron needed. The flesh tone for the hand was blended from white, red and yellow.

After the paint dried, Ron applied a clear spray acrylic, which seals in the colors and adds gloss, making the repair nearly undetectable. 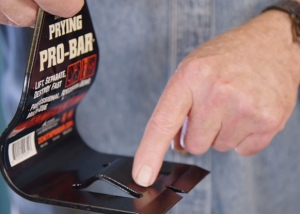 Is Your Central Air Conditioning System Ready for the Cooling Season Ahead?

Simple steps you can take to make sure your central air conditioning system is ready for a trouble-free cooling season.

Is Your Central Air Conditioning System Ready for the Cooling Season Ahead?