How to Replace the Screen in a Screen Door or Window

If you’ve got screen doors or screen windows, sooner or later this is bound to happen to you.  Now, you could take this down to the hardware store and have them fix it, but its easier to do it yourself, let me show you how.  The screen is held in place with a vinyl cord or spline to remove it use the point of a knife to start one end then simply pull it out.  With the spline removed, simply lift the screen out of the frame.

Roll the new screen out on a large, flat surface.  Then, place the frame on top and cut the screen about one half inch larger than the spline groove.  Then, place the cut piece of screen on top of the frame, making sure that it overhangs evenly all the way around.  Next, cut each corner at a 45 degree angle from the outside of the screen to the spline groove.  Using the spline roller carefully press the spline into the groove, first on one side, then the opposite side, and then the two remaining sides.  With a pair of scissors, cut the spline off at each corner, and press it into the groove with a screwdriver.  Finally, trim off the excess screen with a sharp utility knife.  Well, there you go; a brand new screen for just a few dollars in less than a half an hour. 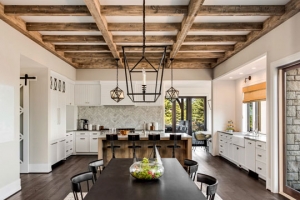 A Step-by-Step Video Guide on How to Install Realistic Faux Wood Beams. 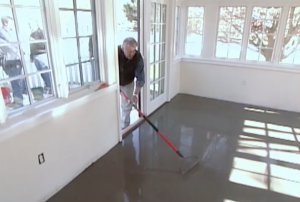 How do you lay flooring over tile? Find out step-by-step instructions that can transform a room by laying wood flooring on top of stone. 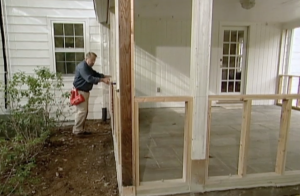 If you have an existing screened in porch or patio, you may be surprised by how simple it is to convert this space into a four season room that can be used all year round.