RON HAZELTON:
Last night, my central air-conditioning system began making a very loud noise. Today, it's even worse. Now I decided that rather than wait for it to fail, I'm going to go ahead and replace it now.

Encon Heating and Air-Conditioning is a company with an excellent reputation here in southern Connecticut. I've asked Service Manager Rick Rosinski to drop by and make a recommendation. After looking things over, Rick suggests that since my system is nearly 15 years old, that I replace it with something much quieter and more energy-efficient.

Rick points out that a central air-conditioning system consists of an outside condenser, an inside air handler, ductwork to carry the cool air to room vents and an air return vent and ducts to bring warmer air back for a re-cooling.

He also points out that it's important to properly size the air-conditioner to the space being cooled. To take advantage of the most energy-efficient system, I'll need to replace both the condenser and the air handler, plus a bit of ductwork.

To learn what's state-of-the-art, I decide to visit the Trane website. I come to a decision and a couple of weeks later, Encon's service technicians Dan Sorelik and Bob Karipsky show up to begin work. Dan gets busy right away removing the refrigerant from the old system.

The gas is actually drawn out by a vacuum pump and stored under pressure in a tank. Then he and Bob disconnect the lines and remove the old condenser. Next, the soil where the new unit will sit is compacted and a new lightweight precast concrete pad is set in place and checked for level.

Earlier that day, the new air-conditioning system was delivered, and now it's time to set the condenser in place. Next, Dan and Bob begin removing the old air handler in the basement. We decided to install the air handler horizontally in order to accommodate additional equipment that will be part of the new system -- a high-efficiency air filter, a humidifier and a dehumidifier.

With this in mind, Dan and Bob begin building a base. Cement blocks will carry the weight. These are then concealed with sheet metal covers. Sound and vibration-absorbing pads are set atop the covers and a drip pan is placed on the pads.

Smaller blocks are placed inside the pan. More insulating pads are put on top. Finally the air handler is brought in and set in place. The high-efficiency filtration system is housed in this case. Trane calls their version, Clean Effects.

The various filter mediums will remove up to 99.98 percent of particles from the filtered air such as dust, pollen, bacteria, pet dander, mold spores and smoke. With the air handler in place, it's time to begin installing the ductwork.

You'll notice that all of the new duct is wrapped in an insulating material on the outside. Now this has an insulating bubble core sandwiched between two layers of aluminum foil and reflects 97 percent of radiant heat.

The ductwork closest to the air handler also has interior insulation. Designed to control noise and further reduce cooling loss, this foam rubber is specially treated with an antimicrobial agent to prevent the growth of mold and bacteria.

This insulator prevents noise and vibration from being transmitted from the air handler's motor and fan into the ductwork. Each section of ductwork is secured to the next with long strips of bent sheet metal called drivers. As the strips are driven in, they pull the sections tightly together.

Encon custom makes nearly all of its ductwork in their own shop. The sweeping curve on these elbow sections, for example, improves air flow and further reduces noise.
[MUSIC AND SOT]
Once the sections are connected together, the joints are sealed with metallic tape, the exterior insulation is lapped over the joint, then it too is secured with tape.

These branch ducts deliver air to individual nets. Most are outfitted with dampers to control air flow. This type of ducting uses adjustable elbows that can be set to just about any angle. [SAWING SOUNDS] The metal duct is then connected to sections of insulated flexible ductwork, using plastic ties secured with screws.

Next, Dan cuts away a section of insulation from the return air duct. Then Bob removes a rectangular piece of sheet metal, leaving an opening into which he sets a connector or collar. The collar is held in place by bending over tabs on the inside of the duct.

This opening is for the humidifier that will help keep humidity at the proper level during winter months, when otherwise dry air can be uncomfortable as well as unhealthy. The system also has a dehumidifier that will extract excess moisture from the air supply during the summer cooling season.

The dehumidifier is connected to the main system, using round ductwork that is fabricated onsite. It's first cut to length, then rolled into a cylinder. A crimper is used to secure the seam and to reduce the diameter of the duct enough so that it can slip inside an adjoining section.


As we've seen, central air-conditioning systems like this one have an outside condenser-compressor and an inside air handler. A refrigerant collects heat from the indoor unit and releases it through the outdoor unit. The refrigerant is carried between the two components in a sealed loop of copper tubing and pipe.

All the fittings must be made completely leak-proof with high temperature solder. [SOLDERING SOUNDS] With the pipes thoroughly sealed, Dan attaches a vacuum pump and once the air has been removed from the lines, begins to fill the system with refrigerant.

Now let's face it, I had to replace my air-conditioner because my old unit was on its last legs, but in the process I got a lot more than a mere replacement. My new air-conditioner operates so quietly, I can barely tell that it's running and it uses a fraction of the energy that my old system did.

And there's another bonus. Did you know that the air inside an average home is four to five times worse than the outdoor air when it comes to dust, mold and other troublemakers? But the whole house air filter in this Trane Clean Effects unit does a good job of getting rid of that bad stuff.

It filters out 99.98 percent of allergens, particles, pollen, smoke and even bacteria. In fact, this filtering system is 100 times more effective than the standard one inch filter found in most home central systems. Yep, modern air-conditioning like this does a whole lot more than just cool the air.

Hire a professional HVAC company to replace your failing central air conditioning system with a new system that is quieter and more efficient. The pros are licensed to work with air conditioning refrigerants. They can size/install a new outside condensing unit, inside air handler, duct work, and components such as a high-efficiency air filter, humidifier and dehumidifier. 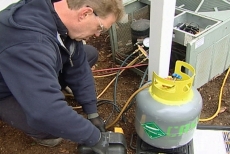 Capture the Air Conditioner Refrigerant and Remove the Condensing Unit

Capture the old refrigerant in a pressurized tank for proper disposal. A license is required to handle air conditioner refrigerant to prevent its escape and subsequent harm to the ozone layer. Disconnect the empty lines and remove the condensing unit. 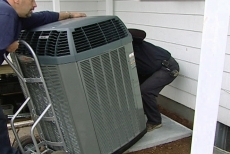 Set the New Air Conditioner Condenser on a Concrete Pad

Tamp the ground fort a concrete pad for the air conditioner condensing unit. Use a bar level to ensure the pad is level from front to back and side to side. All home air conditioner equipment should be level. 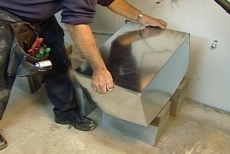 Remove the Old Air Handler and Position the New Model

Remove old equipment and stack/cover concrete blocks to bear the weight of the air handler. Add sound/vibration absorbing pads on top, followed by a drip pan. Set the new unit on smaller blocks in the bottom of the pan. 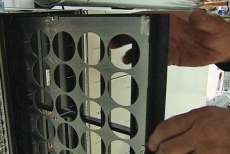 Add a High-efficiency Air Filtration System to the Air Conditioner

Install a high-efficiency air filtration system on the air conditioning system that can remove more than 99% of the contaminants from the air. It effectively removes dust, pollen bacteria, mold spores, pet dander, and smoke. 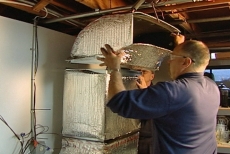 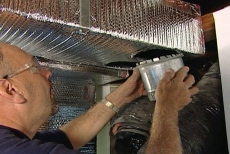 Secure round metal ducts to the main ducts and to insulated flexible ducts that deliver air to individual vents within the home. Secure them with plastic ties and screws. Connect return air duct to incoming side of air handler. 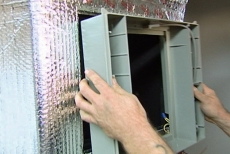 Cut Opening in Supply Duct and Install the Humidifier

Cut an opening in the air conditioner supply duct and install a collar and humidifier. It will keep the moisture level inside the house at a more comfortable level during winter months when the air is dried by heating. 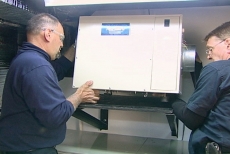 Mount Brackets/Platform and Install the Dehumidifier

Add a dehumidifier to extract moisture from the air supply during summer months when the humidity is high. Connect the dehumidifier to the main system with round metal ducts. Use a crimper to fit duct lengths together. Secure with screws. 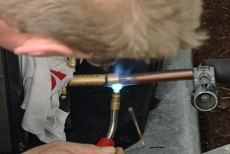 Run insulated copper refrigerant tubing between the inside air handler and the outside condensing unit. Seal the joints with high temperature solder to make them completely leak-proof. 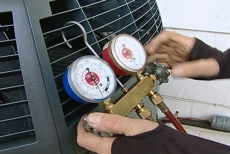 Remove Air from Copper Lines and Fill with Refrigerant

Remove air from the sealed copper tubing that runs between the air handler and condenser. A vacuum pump draws the air out. Fill the emptied lines with the correct poundage of refrigerant for the size of your air conditioning system. 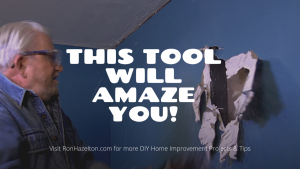 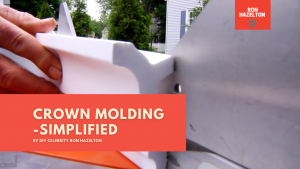 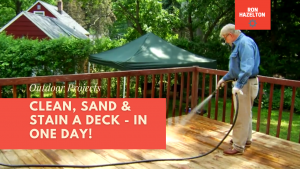